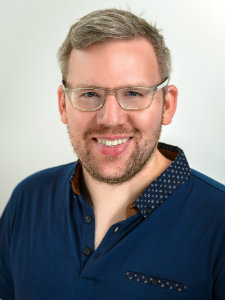 David Morrison is a Research Assistant working with Dr David Harris-Birtill on a project to apply zero-touch technologies in a clinical environment. David graduated from Abertay University's Computer Games Technology degree in 2003. He spent the next ten years working as a designer and programmer in the games industry with companies such as VIS, Zoe Mode, Ubisoft Reflections and Outplay Entertainment. He also independently released a number of titles for the then emerging mobile phone games market on platforms from J2ME to iOS.

In 2014, he moved into the field of Civic Technology and Open Data as a Code for Europe Technology Fellow for that year. As part of this project, he produced Go Explore; an open source wildlife and walking guide for East Lothian, based on Local Authority geographical data - currently available from the Apple App Store and Google Play.

Since the completion of the Code for Europe Fellowship, David has worked as a freelance app and website designer. He specialises in working with large institutional data sets, making them accessible to the public in highly visual and interactive ways. This has led him to work with public sector institutions such as the University of Edinburgh and Edinburgh City Council. His most recent project is an app for use by the Drug and Alcohol Recovery Community in Edinburgh.

You can find our more about David and his interests on his personal page.